“The sun was just rising when you and the members of your party arrived to the town of Rhein. You all have heard rumors about the problems the kingdom was facing; heartless bandits assaulting travelers on the roads, terrible monsters ravaging villages and even the God Patriarch, Radaos, going missing from the Heavenly Peak…! But… Rhein, still, seemed to be bustling with much activity.

Turning your head, you glanced at your companions, knowing the great adventure you were all longing for was about to begin…!”

GeaSaga is a somewhat traditional role-playing game with some Japanese and western influences. It shares the same setting as Heroic Tale and Flesh, my previous projects, but it focuses a bit more on worldbuilding elements rather than dungeons and is intentionally much more lighthearted in nature. My major aim was to (hopefully) create an uncomplicated but entertaining adventure getting a bit of help from the player’s imagination.

From the go, you get four characters representing some archetype in your team. You will explore and discover new areas, gather hints, complete tasks, find treasures and then move onto new and more exciting challenges. I tried not to put much emphasis on hand-holding and, although there’s a proper ending and some over-arching plot, it’s not heavy on narrative and you are not required, for the most part, to complete every single quest.

Much of the inspiration behind this project came from the era of Japanese home computers like PC-88 or FM-7 so, as a personal challenge and in order to make the game as inaccessible as possible, I decided to use RPG Maker 95, which is basically ANCIENT by today’s standard but represents very well the spirit I was aiming for. This will probably put some people off and test way to much the patience of some players but, in many aspects, I worked on ease the frustration that could originate from the clunkiness of the engine as much as I was able to! 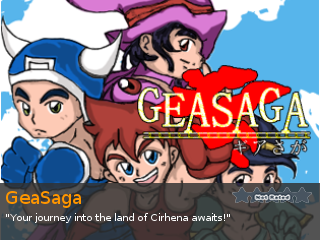 Thank you so much for visiting this site! I’m a newbie indie game developer and amateur graphic artist working mainly on RPG Maker.

RPG Maker is being published by

Feel free to contact me on this address: kainworks@aol.com